About Cherokees to Oshkosh A.K.A. "CtO"

Growing our family one aviator at a time is now a reality bringing pilots from around the country to fly together, support each other, and enjoy life. Cherokees to Oshkosh welcomes PA24, PA28, and PA32 pilots.

In honor of the 60th year of the Piper Cherokee, the 2020 Mass Arrival will be limited to 60 Cherokees to celebrate. These will include all Cherokee variants, PA28s and PA32s. 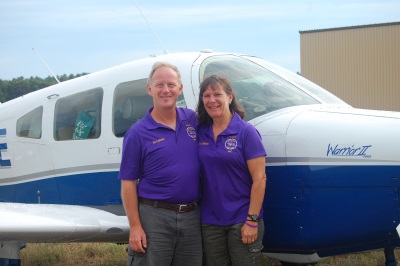 Ed coordinates with other members of CtO leadership to develop flight operations procedures and training to ensure a safe, smooth arrival at Airventure each year. He feels honored to have been asked to assume this role in 2019 from Dwane "Ferg" Ferguson, who did a superlative job creating and fine-tuning the CtO procedures from scratch. Ed is committed to Ferg's measures of success: nobody "trades paint" and everyone arrives safely and has a great time.

He and his wife Dori have been flying their Piper Warrior with Cherokees to OSH since the first year in 2010 and they were honored to be "Cherokee Lead" during the tenth arrival in 2019. He has been a qualified Lead Pilot in the Formation and Safety Training (FAST) organization since 2016 and has worked with many other pilots in a variety of General Aviation aircraft to help them advance their formation flying skills.

He retired from the US Air Force as a Colonel, having served as a Family Physician in various locations for 24 years. He briefly served as a Flight Surgeon for an F-16 fighter squadron, where he quickly learned to respect the discipline and candor those pilots used to make a challenging and risky occupation safer and more effective. He works hard to bring those ideas to the CtO team and is passionate about ensuring all CtO participants feel safe, are well-trained, and are able to grow their formation flying skills at the pace they personally want to set. 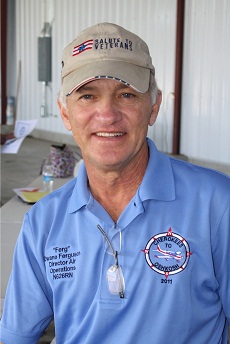 Dwane “Ferg” Ferguson is CtO’s former Director of Air Operations and lives in Gallatin, TN. Simply put, if it has anything to do with the flying component of this event, Ferg is in charge. He began flying airplanes in 1968 in an Aeronca Champ while earning a degree in Mechanical Engineering. In 1971, he joined the Air Force and began his military career flying the C-130 Hercules, including numerous tours to Viet Nam. He finished his career after serving in Desert Storm and earned not only his Masters Degree while serving our country, but also his CFIA and A&P Certificates in his "free" time while still on active duty. During his tenure in the Air Force, he was a Check Airman/Instructor Pilot teaching formation flying in C-130's not only in VMC but in the pioneering days, on the gauges as well. Upon retirement from the Air Force in 1993, Ferg went to work for American Airlines until his retirement in 2006. Ferg currently holds a Lead F.A.S.T. card.

American Airlines’ loss was CtO’s gain. Ferg joined Cherokees to Oshkosh in the very beginning in 2010, organizing and refining the formation procedures we enjoy today. He has organized clinics across the country providing support in person with the intent to make the clinics self-sustaining. A very successful endeavor as we now have clinics coast-to-coast and North to South. In addition, he has added a level of training that far exceeds anything necessary for the CtO arrival to Oshkosh that brings a greater level of safety, but also a great level of satisfaction to those wishing to reach new heights performance in the art of formation flying. Many of our pilots prefer the more sedate training necessary to accomplish the simple CtO arrival, but take the additional training as an added bonus that makes them supremely confident in their airmanship and ability to avoid an unhappy encounter even at close range.

At Waupaca he’s typically in someone else’s right seat coaching them on the CtO procedures or in his Cherokee Six as “Cherokee Tail”, shepherding the group during practice flights or the actual arrival. His teaching style is that of encouragement and praise and, as he will tell you, his whole objective with CtO is to get the whole group safely on the ground at KOSH without having “traded paint”. His balance of professionalism, humility, and personal engagement with all of the CtO participants has made each year’s event feel like a family of flyers at all skill levels who arrive at OSH safely and with a great sense of personal accomplishment. 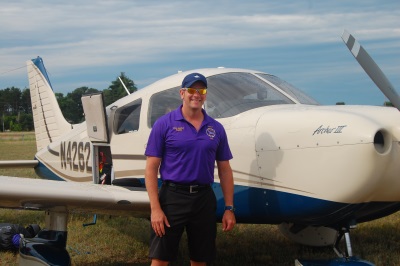 To say Chip is the Director of Legal Affairs and Assistant Director of Operations is a considerable understatement. His enthusiasm for the organization and its mission has been an inspiration and motivator for the group since the first day. And while his glass-paneled, air-conditioned Turbo Saratoga II is the envy of many other participants, it’s his genuine love of general aviation flying that is so palpable and engaging. Since starting flying in 2008 he has amassed over 1700 hours, his Instrument rating, and numerous endorsements. From being an Angel Flight pilot to introducing youth to the joy of general aviation through the EAA Young Eagles program to being a “carded” Formation and Safety Team (FAST) Leader, he brings a wealth of talent to CtO. And as a founding partner of Call & Gentry Law Group in Jefferson City, MO, he provides the organization with the legal talent needed to keep the organization on track legally.

The right-hand man for Operations, his first focus is on making CtO a safe and fun experience for pilots of all backgrounds. While managing and safely flying as part of a large formation is a challenge and can be humbling, Chip’s talent, enthusiasm, and sense of humor make it easy for others to mature as safe Mass Arrival pilots regardless of their skill level. 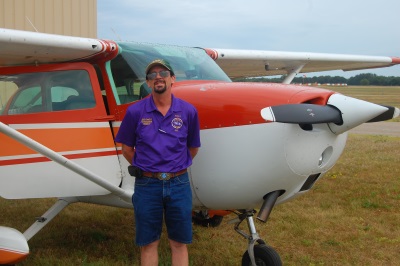 Art is CtO’s “IT guy”, however Information and Technology is just a small part of what Art contributes. While Art tends to be quiet and unassuming, he has invariably been focused on improving the CtO group’s experience as a whole. While in Waupaca for the pre-arrival training and coordination, for example, he takes the lead in staging aircraft for the taxi out for departure; no small task when one considers there are typically dozens of aircraft parked close together and in no particular arrangement.

Art lives outside of Kansas City, MO and is a member of the Masonic Lodge, which partly explains the integrity and ethics one senses while being with him – and how Chip, his son, came to have them as well. He joined Chip the first year of CtO as his right-seater in Chip’s Archer but has been joining the group every year since then in his own Cessna 172, which, with the wings on the “wrong” side, the group fondly describes as the only fully aerobatic Cherokee of the bunch. 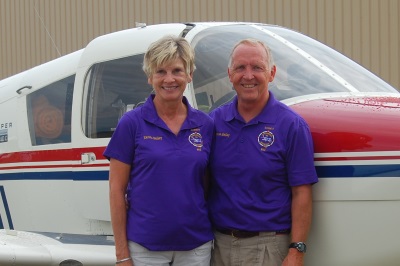 Doane and Karole take care of CtO’s general administrative duties, including registration and sharing information via our NOTAMs.  The spark that ignited Doane's interest in aviation came from his late father, a B-24 veteran.  Although starting his flight training rather late in life, he, like Chip, can't find enough reasons to "go flying."  He and Karole proudly own and fly a beautiful Cherokee 140.  Those of you in the northwest PA area should try to attend the mini-clinic Doane sponsors each spring.

But the considerable contribution they make to CtO by handling registrations and NOTAMs is clearly overshadowed by their annual holiday gift to each year’s participants: an exceptionally well-made DVD of that year’s arrival and its planning. Each year’s DVD is clearly a work of love and of art and is filled with in-flight and on-ground videos and still pictures set to music.

Doane and Karole have been active members of the CtO family since the beginning and have been trusted to fly the “Alpha 2” position for several years. Their contributions to the program and exceptional airmanship resulted in them being selected as “Cherokee Lead” for the 2015 and 2016 arrivasl. 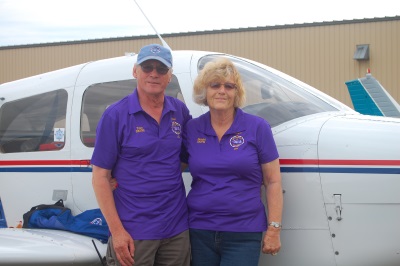 The Union Jack on the tail Tony and Sandra’s Warrior definitely catches one’s eyes when they arrive at Waupaca from their home outside of Akron, OH and gives one a forewarning of their accent and wonderful sense of humor. As much as the US has adopted this couple from “across the pond”, they continually adopt new members to the CtO family through their good nature and friendship. Both are active pilots and essential members of the CtO leadership team: they have served as the linchpin to garnering support and sponsorship since the beginning of CtO. In fact, Tony’s prior work with Goodyear has resulted in sponsorship support from the Goodyear Aviation Tires Division.

For many years they have overseen the challenging task of arranging for each year’s custom shirt to be designed, ordered, and appropriately distributed to each participant and are now supporting Dan Gillette as he assumes that responsibility.

Wayne and Angie Michelli - Treasurer, Director of Hospitatlity and Accomodations 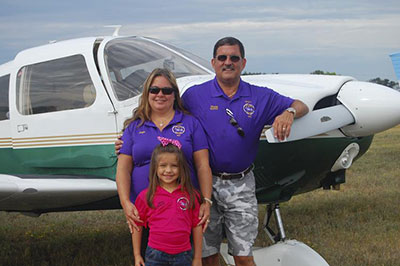 Wayne, now a 900 hour pilot, joined Cherokees to Oshkosh for the inaugural arrival, SloshKosh 2010, as a green 125 hour pilot. In 2017 Wayne received his F.A.S.T. Wingman card and successfully completed his IFR checkride. One of his favorite trips was with a high school friend and their wives to Stella Maris, Bahamas.

Passionate about formation flying, Wayne is treasurer for both CtO, Cherokees to Oshkosh, and RPA, Red Star Pilots Association.

Every July since 2010 you will find Wayne, his wife Angie, and daughters Ashley and Jenna at EAA Airventure — Oshkosh. Early each spring the family hosts the year's first Cherokees to Oshkosh Mini-Clinic at their Oceanfront home in Ocean Isle Beach, NC (60J).

Wayne now spends his time flying 73T, managing their rental beach properties in North Carolina and catching up on things around the house.

Dennis and Peggy Frett - Director of Ground Transportation and Operations 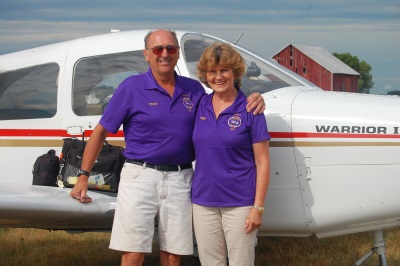 Dennis coordinates the organization’s ground transportation, and aircraft parking and choreography during the pre-arrival training at Waupaca, and for social events once we arrive.  With over 2,000 flying hours since getting his license in 1995, he thoroughly enjoys the type of flying Cherokees to OSH participates in.  He has been a key member of the "family" since he joined the group in 2011 with his wife, Peggy.  Most of his flying time is in his 1978 Warrior II, which Peggy has soloed as well.  They are both now retired from self-employment and corporate, respectively.  He and Peggy are now living in Windsor, Missouri and working full-time on new construction and moving onto their private airfield, WindSoar - 1MO2, in Windsor.

Dan Gillette with Daughter Missy -  Director of Merchandising and Apparel

Dan and his daughter Melissa were at the first CtO in 2010 when she was 10 years old and the only child in the group. If you see a picture from that year, you may notice a skinny little girl in an adult-size shirt worn with a string for a belt and wearing it as a knee-length dress. For the 2020 year, Melissa will be 21 (*gasp*). Dan has flown Cherokees for over 20 years and currently flies a Turbo Saratoga to 3 satellite clinics that would be a 6 to 9-hour drive away from his home in Sioux City, Iowa. He has been to Oshkosh with all of his five children over the years, but Melissa is the one who wants to come EVERY year. Dan is a 2000 hour instrument-rated pilot and “carded” by FAST as a wingman formation pilot.

In addition to his duties with the CtO apparel, Dan, as a psychiatrist, serves the (many) mental health needs of the CtO family. He is also a singer song-writer and writes a song about each year’s mass arrival, as well as sometimes about mini-clinics, birthdays and various flying mishaps.